The fact that he is not a Polish citizen and that, in fact, he never was, he something twenty-year-old Lublin resident Jakub Gorfinkel discovers at the end of June 1967. He is summoned to the Civil Militia station. "Show us your ID card." Jakub shows the little green book which he had received a little less than two years earlier. "This identity document is cancelled. This ID card was issued in error and we have decided that you do not have Polish citizenship. You can go. How is it possible that I’m not a citizen?" 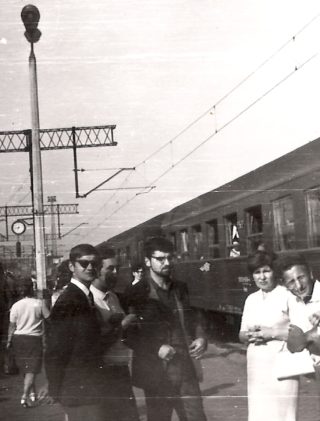 Civil Militia officers explain to Jakub that it is because he was born in Mironówka, a small town in the Kiev region of the USSR. His father, from whom he had inherited both his surname and his first name, was born in Lublin in 1916. There, he ran a barber shop and was a board member of the Barbers’ Guild. He belonged to the Jewish, socialist and anti-Zionist Bund. “As opposed to Zionists, Bundists did not want to emigrate. They wanted to find a place where Jews could, autonomously, live a social and cultural life in a so-called zone of settlement within Poland, Russia and Lithuania.”

Following the outbreak of World War II, he leaves for Lwów. Miraculously, he avoids being deported to Arkhangelsk. In order to avoid being arrested by the NKVD, he voluntarily reports to the labour army and is assigned to exhausting work in the mine at Donbass. It is that Jakub’s father is forced to accept Soviet citizenship. His Polish identity document is stolen. In Russia, during the War, without documents you became an “enemy of the people”. They told him, “Listen, there is no Poland. It’s not possible to restore your Polish documents”. As a Soviet citizen, he is conscripted into the Red Army. He takes part in the defence of the besieged Leningrad. His profession as a barber helps him during this experience – he receives officer’s food rations – 600 grams instead of 400 grams of black, earthy bread daily.

Following the end of the War, Jakub’s father marries a Ukrainian Jewish woman – Miriam Bindman. This is his second marriage. His first wife and son perished in the Holocaust. Jakub senior and Maria settle in Mironówka, located one hundred kilometres from Kiev. One can imagine that this was not the place where they dreamed of building a new life. Even with his Soviet citizenship, Jakub’s father is still considered an “uncertain, ideological element”.

Their first son is born there. It is only after Stalin’s death, that there is a thaw in the Soviet Union and an agreement between Gomułka and Khrushchev in 1958. Jakub’s father regains his Polish citizenship and the whole Gorfinkel family moves to Poland as part of another wave of repatriation. In Lublin, Jakub finishes primary and secondary schools and begins his university studies.

In 1967, at the Militia station, Jakub asks what he should do.

“You should go to the Soviet embassy in Warsaw and ask for them to re-register you as a Soviet citizen.” I said, “I don’t want to do that!” But after I left, the militia was constantly after me, constantly wanted to check my identity papers. “Halt! Please show us your ID card”.  “I don’t have one”, I reply.  “Do you have any other identity papers?” “No, I don’t.” They kept following me. After a couple of weeks of playing this game, I thought, “I’ll go to Warsaw, to the Soviet embassy and I’ll ask there what I should do”. I’ll simply go there and request Soviet citizenship. So I went and said that my Polish citizenship had been taken away and they told me that I should take Soviet citizenship. They laughed. “You should go back to Lublin! The comrades there should not fool around like that!” This is what the Soviet ambassador said.

Jakub returns to Lublin and again returns to the Militia station. They say to him, “You know what? Go home and we’ll sort it out with our Russian colleagues”. After a few months, Jakub receives notification from the Soviet embassy that, after consultation with the Polish side, his Soviet citizenship will be “returned”.  He receives a foreign passport as a citizen of the USSR. Now, in order to remain in Lublin, he must obtain a residency visa as a foreigner. He becomes a stranger in his own country. During his next visit to the Militia station, his new passport is stamped, authorising him to remain in in the People’s Republic of Poland for the following two years – until December 1969.

“I’m thinking that they’re already planning that, on the expiry of this two-year residency visa in Poland, they would not renew it. Simply, let Russia take care of this troublemaker who is opposed to the policies of the Party. And, of course, Russia has places where to do this, such as Kolyma, Kamchatka.”

That moment, when Jakub Gorfinkel lost his Polish citizenship, was not coincidental. In response to the Israeli-Arab conflict (the Six-Day War) between Israel and Egypt, Jordan and Syria, in the first days of June 1967, so-called “mass” rallies and ideological discussions took place all over Poland – in workplaces, schools and in other public institutions. The aim of these propaganda meetings was to publicly condemn Israeli policies and “Western imperialism”, as well as to praise the Soviet battle techniques and strategy which were utilised by the Arab League.

“In Lublin, the Party decided that people had to listen to a clarification of Party policy. They began doing this in various places such as cultural centres. Then I saw that there was to be a meeting with a Party representative who would clarify why diplomatic relations had been severed with Israel. I rang my friends, Miska and Zosia, and said, ‘Let’s go and listen. Maybe we can ask the speaker some awkward questions’.”

“Because I happen to be impertinent, at the meeting, I asked the speaker some very, very difficult questions which were based on Nasser’s speeches – based on what the Egyptian President had said. I asked simply, ‘Was it like that?’ I posed questions which were uncomfortable for the speaker. I stumped him constantly. Zosia was sitting next to me. Miśka remained silent as a mouse. Zosia kept constantly tugging at my clothes saying, ‘Sit down. That’s enough!’ Miśka, sitting nearby, also tried to calm me down. It was at least a meeting where no one checked who had entered the club. But our Civil Militia knew who had been there. A couple of weeks later, a Militia officer came to my home bringing with him an invitation – an invitation to come and meet with Militia investigators.”

Jakub was to bring with him his identity card – to prove who he was.

“All I had done was to accurately quote Nasser’s statements – but they didn’t care. What concerned them was that I had been insolent and that the Polish population, instead of believing in the Party’s policies and supporting them and being in favour of its diplomatic stance with Israel, had begun to have doubts at the meeting. Later, other voices had also begun asking questions not in the style of the Party’s policies. I had awakened such a mood.”

Jakub Gorfinkel immigrates to Israel in 1969. On 21st July, he leaves Warsaw. A few days later, he lands in Israel on a plane out of Vienna.

“We didn’t sleep the entire night before my trip, because it was the day when Armstrong landed on the moon – a historical day. I didn’t sleep the whole night. I watched all the preparations for the landing and how he landed on the moon. They showed it all on television. I sat there and watched it. Later, straight after the moon landing, we ordered a taxi and went to the Lublin railway station – just my family. And I left – alone.”

“My father was very much afraid. Firstly, it was like ripping out roots planted fifty four years before and transplanting them into new ground. This is something which is not easy for people over fifty. Here, you know where to go to the clinic, to the shop and you know the language. This is the place you are used to and where you have an apartment. He really didn’t want to leave even though, in 1968, he had been thrown out of his job. They had thrown Jews out everywhere.”

“But the newspapers wrote – like father, like son – and vice versa, meaning that we were troublemakers, uncertain elements and they began throwing us out. Every day, the press wrote that, for example, someone had been expelled from the Ministry of Internal Affairs. They published a whole list of such people, hidden behind other Polish names. So what does the barber’s co-operative do when that co-operative has only one Jew and, added to this, my father is the manager of the Podzamcze branch? They threw him out also. He was also sacked as the manager of the branch and sent somewhere where only one customer would come in on any day. But he had an apartment and work, of sorts. It was very difficult, but my father still didn’t want to leave.”